Co-founder, Executive Director of Board 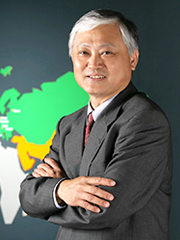 As the Co-founder & Director of BOD of Advantech, Chaney Ho is in charge of the company’s global sales and marketing strategies. He is also leading the company in its new branding mission toward “Enabling an Intelligent Planet.” As a result of his leadership, Advantech has received recognition through the years from the prestigious brand-consulting firm Interbrand as one of the Top 10 Taiwan Global Brands.

Through long experience in the company, Chaney has built a reputation as a leader in sales and marketing strategy, and in building global brand recognition. While leading Advantech Greater China, Chaney devised a deep penetration marketing strategy for the Chinese market, and achieved double-digit growth year after year. Now the greater Chinese market (including China and Taiwan) accounts for 30% of Advantech’s revenue.

In 2010, after Chaney took over Advantech president’s role, he participated in the planning Advantech's current vision "Enabling an Intelligent Planet" which speed up Advantech's entry to the Internet of Things (IoT) era. Chaney also lead the sector-Lead transformation of Advantech’s organization so as to help it transformed from product-oriented to industry-oriented.

Chaney was born in 1954 and graduated from Tatung University in Taiwan, landing his first job with HP Taiwan. He started off as an engineer, and worked his way up to become a manager. Prior to Advantech, he worked as the general manager of Inalways Corporation. Under his management, Inalways successfully made its IPO on the OTC market in 1999, and was awarded the National Small & Medium Enterprise Award by the government. Chaney later won personal recognition, receiving the Small & Medium Enterprise (SME) Professional – General Manager Award, for his management performance with Inalways.

Chaney believes that talent is an enterprise’s most valuable asset, and he likens himself to a coach for young and upcoming talent. He hopes to continue to guide newer employees, sharing insights gained from thirty years of experience.