These – and a thousand other factors – create a very unique, complex, and costly challenge for establishing data communication channels that will be reliable, long lasting, and cost effective.

For example, a primary difficulty faced by many is the need to connect remote equipment sensors to central monitoring systems. Inside a steel mill, the environmental conditions are intense: excessive heat, heavy machinery, large distances, and high levels of EMI significantly shorten the lifespan of wires and network equipment.

Conversely, a tank farm deal with issues such as distance, cost and weather factors when connecting sensors and equipment.

These are two extreme cases and, of course, the industrial world contains everything in between and in varying degrees of complexity.

Wireless I/O has had a rocky past and typically has not performed well enough to endure the harsh demands of industrial applications.

Signal echo, noise and channel sharing other reasons can deteriorate or even stop data flow over wireless networks. Signal Echo – Typical open radio frequencies (900 MHz and 2.4 GHz) used in today’s wireless data communication applications have a reasonable penetration rate through office cubicles, drywall, wood and other materials found in a home or office, but tend to bounce off larger objects, metals, and concrete.

This bounce can redirect the data signal and return it to the original transmitter, causing an “echo” or “multipath”. First generation wireless systems easily became confused with this type of interference and cancel transmission . The result was a state referred to as “radio null” that prevented data communication.

Noise – The electromagnetic emissions created by large motors, heavy equipment, high power generation usage, and other industrial machinery could create extremely high levels of “noise” that interfered with early wireless equipment. In these “noisy” environments, transmitters and remote nodes were unable to “hear” each other, resulting in frequent data loss.

Channel Sharing & Interference – Radio Frequency space became enormously crowded. FCC approved frequency spectrums were shared by many devices, including those utilizing WiFi (IEEE 802.11) and IEEE 802.15.4 and, frequently, the result was data confusion as receivers and nodes gathered and sent information on the same channel as other devices in the area.

Industrial Protocols Not Supported – The vast majority of early wireless devices were designed for home and inter-office use. Because of this, very few engineers were addressing industrial protocols such as Modbus or the need to move from wireless to RS- 232/422/485 support. Additionally, casing, circuitry, and connections were designed for lightweight usage that was inadequate for rugged industrial settings.

Distance – The sheer distances between central control systems and remote sensors and equipment eliminated the feasibility of early wireless systems with ranges of several hundred feet or more.

Security – Early adoption of IEEE 802.11 standards created a large number of security issues and continues to require a high level of counter-measures to ensure the safety of data and business systems.

So, while the fundamental premise of wireless was a clear answer to many industrial data communication challenges, the reality was that, unless these obstacles could be overcome, wireless was not a solution at all.

Over time, as new technologies have entered the picture, the outlook has changed. Today, there is a wide array of wireless data communication solutions that can overcome industrial environmental challenges.

Here is a snapshot of the options you have with some corresponding pros and cons. When looking for the optimum industrial wireless solution for your situation, you will want to consider these factors.

Advanced transmission and modulation schemes can counteract and reduce the effects of echo, noise, and channel sharing. Here are two of the best to look for.

Caution: All wireless transmitters, nodes equipment on your network must support the same transmission scheme to operate properly.

FHSS (Frequency Hopping Spread Spectrum) – Data is transmitted on one single channel at a time, but the channel is rapidly and constantly changing or “hopping”. This scheme requires low bandwidth.

DSSS (Direct Sequence Spread Spectrum) – Data is transmitted simultaneously over every available channel, making it a little more reliable in “noisy” environments, but it is also bandwidth intensive.

In addition to these transmission schemes, there are several design and development standards that play an essential role in establishing reliability, security, speed, distance efficiency. Determining your best solution depends on your application and needs. In outlining the various wireless options below, the “Pros and Cons” listed are from a typical industrial environment perspective.

Pros - This de facto standard forms the staple of home, business and office networking and is widely used for its high data transfer rate abilities (maximum throughput of up to 54Mbit/s with 12Mbit/s being typical).

Pros - Bluetooth has gained popularity because of its small physical size and instant network setup. Three classes allow Bluetooth to move data anywhere from 3m to 100m away.

Cons - Bluetooth has a relatively high-duty cycle (especially in 2.0 and early versions), minimal data throughput (currently a maximum of 3 Mbit/s) and requires a fairly defined line-of-site because of its low penetration qualities.

Pros - Relatively speaking, ZigBee is the “new kid on the block” but, it has several features going for it. It is far more power-friendly than Wi-Fi and Bluetooth because of its advanced sleep-and-sniff capabilities. Additionally, it has high penetration and operates with an even smaller physical footprint than Bluetooth.

Cons – Zigbee has data at rates of up to 720 kbit/s, and poor interoperability. Additionally, because it is relatively new, hardware developers are still refining and defining their systems.

Pros – Proprietary RF (PRF) provides you with an exact solution to meet your specific needs. Modulation schemes, distances, throughput, casing, configurations, etc… can all be customized to your liking. With PRF, interference issues virtually disappear because you are no longer fighting for the exact same channel sequences that standardized protocols and formats use. PRF also tends to be more power-friendly because protocol and hardware configuration does not require an exact set up that may or may not be more energy efficient. For this same reason, costs can actually be lower. PRF can operate in both the 900 MHz and 2.4GHz frequencies, giving you greater control over distance, penetration, and channel interference. Additionally, there are many PRF off-the-shelf solutions that may meet your needs, saving the time required for customization.

Cons – PFR does not provide interoperability with any of the established wireless standards and is considered by some to create vendor lock-in.

Below is a chart that compares various aspects of wireless solutions:

If circumstances allow you to select standard or off-the-shelf solution, then your options are fairly clear. In terms of range, penetration, frequency, data rate, you have a set base line to choose from. However, if your environment cannot be modified to fit these standards, you will need to consider proprietary RF. Here are some important things to consider:

is determined by four elements:

Transmit Power – Transmit power refers to the amount of power that is emitted from the antenna port of the radio device. Proprietary RF is regulated in the USA for up to 1W. This provides substantial benefits when long ranges are needed because, the higher the transmit power, the “louder” the signal, thus the farther it can travel.

Line of Sight (LOS) – RF signals are different from the visual spectrum of the human eye, being elliptical rather than linear. For maximum communication, the fewer barriers along the LOS between receiver and transmitter, the better. Frequency and transmit power levels have the most impact on how well the signal can negotiate physical and EMI line of sight barriers.

Data Volume – The data rate and volume will also impact your range. Large data packets are more difficult to transmit than smaller packets and will typically reduce range.

Antenna selection will depend on your communication needs, with system array and range being the biggest factors. There are two basic types of antennas:

Directional – Sends and receives the signal in a single direction. Think of a football shape, with antennas located at either end of the football. This imagery is important because interference can occur at any point within the spectrum. This antenna will give you the largest range. Examples: Yagi, Dish, and Panel.

Omni-Directional – Sends and receives the signal in a linear radius. Think of a doughnut with the hole being the location of the antenna. This antenna will allow the largest number of nodes. Examples: Vertical Omni’s, Ceiling Domes, and Rubber Ducks. 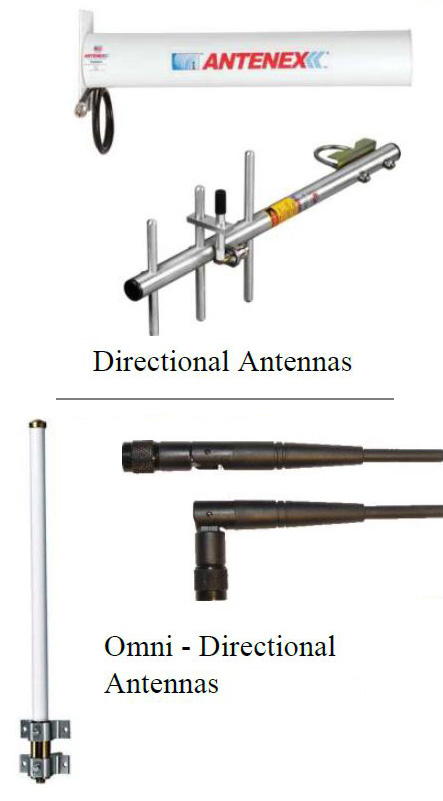 Point to Multipoint – Moving data from a single location to multiple locations.

With today’s technology, the possibility of a wireless industrial data communication environment is stronger than ever. Issues that had plagued the wireless option are being minimized, especially as proprietary RF becomes fine-tuned to address specific challenges. Industrial companies can now create extensive data communication networks in the harshest of environments while achieving these advantages:

Longevity – Sensors, transmitters and receivers can be designed for the harshest of environments, with many operating at temperatures between -40 to +85 °C. Concern about wires deteriorating or needing to install multiple signal boosters over long distances are eliminated.