지능형 교통
지능형 교통
Wayside Control
ITA-2000 Series are designed and functioned as front-end wayside controllers. Due to compliance with EN 50121-4, ITA-2000 series are the most suitable offerings in terms of wayside controllers for various systems including centralized traffic control (CTC), Automatic Train Control (ATC) and others. With EN 50121-4 compliance and development of rock solid Advantech systems and platforms, applications in wayside control are precisely monitored, delivering a more secure railway operating environment. Fire Alarm System and others.
System Topology 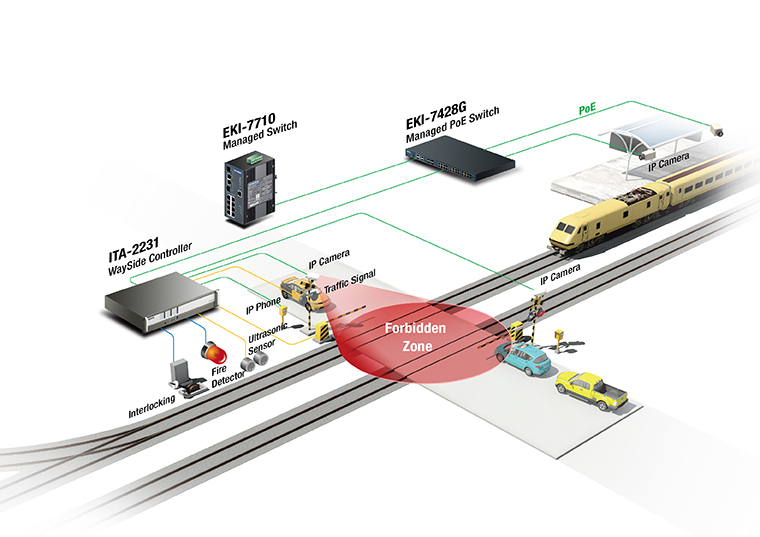 Automatic Train Control
System Requirement
Automatic Train Control (ATC) plays a critical role in railway transportation by detecting the positions of rolling stock at specific times, controlling the speeds of trains, and supervising real-time operating conditions. ATC generally consists of Automatic Train Protection (ATP), Automatic Train Operation (ATO) and Automatic Train Supervision (ATS); it makes use of track detectors, signaling devices and interlocking systems to assure the maintenance of minimum safe distances between operating trains. ATC requires total, integrated systems that compute and control positions of railway vehicles, set up routes and identify rail status, display and manage the synchronous station data information, and examine each locomotive or car when it comes to a stop at a station. In China, an array of Advantech product offerings has been applied to rail traffic, and a number of success stories have been generated that illustrate ever increasing safety for rail transportation.

Centralized Traffic Control
System Requirement
Centralized Traffic Control (CTC) refers to an integrated, stable system that is responsible for collecting and displaying current status of all operating stock, railways, and stations, distributing back-up equipment or power for emergency situations, and connecting the interfaces and structures of sub-systems, e.g. Interlocking, Automatic Train Control, and others. CTC, as its name indicates, is a platform where station managers or other staff direct and control rolling stock in a focused, effective manner. At the station-level, the CTC system records every train passing by the station with its number, exact arrival and departure time; at the central level, CTC displays the positions of trains on their tracks, records detailed status of stations, and in turn delivers commands on the basis of collected data. Accordingly, the function of CTC is to control sub systems in terms of train operation. Advantech is proud to supply the stable, reliable, integrated platforms that cutting edge railway operations rely upon.

Interlocking
System Requirement
Interlocking is controlled by stable, integrated computing systems in the modern railway; it conforms all signaling and route locks to logical patterns, offering high levels of safety and activating comprehensive diagnostics that automatically report to maintenance staff. SSI comprises Central Interlocking (CI) and Trackside Function Modules (TFM). CI attains fail-safe interlocking control via logic circuits, while TFM executes signaling or route locking once it receives CI commands. SSI is the paramount device that operates route locking, proximity switches, and more to keep operating trains going the right way on the right tracks based on preinstalled parameters; this precludes the collisions or derailments that used to occur because of human errors. Now, with the development of rock solid Advantech systems and platforms, SSI is precisely controlled and monitored, delivering a more secure railway operating environment.
Industrial Communication Solutions for
Wayside Control

EKI-1500 Series and EKI-7000 Series
Wayside control systems require a high degree of safety and stability. For such systems, products need to connect multiple RS-485 serial devices to an Ethernet network without building a dedicated transmission line, and offer an easy way to set up a redundant Ethernet network for a backup connection. By using EKI-1500 Series Serial Device Servers to connect on-site serial device via RS-485, the engineering staff can use the computer in the control room to monitor the condition of the protective relay so as to further control the RTU. On the other hand,the EKI-7000 Series Ethernet Switch provide an easy way to establish a redundant network with a recovery time of less than 20ms. These two product lines both support a wide operating temperature (-10~60°C) to withstand an outdoor environment, and their metal shielded enclosure with robust design can not only protect the product but can also eliminate the problem of interference.