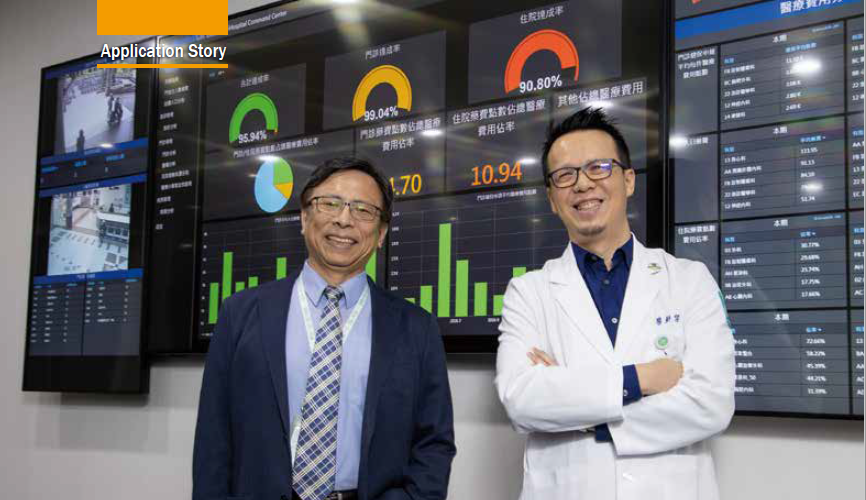 By M.D Wang with images provided by Advantech

The information in medical institutions is massive and complicated; therefore, Yee Zen General Hospital adopts Advantech’s Command Center Intelligent System to create the visualized information system with the concept of IoT, which greatly improves the efficiency of operation management.

Unlike most companies and organizations, hospitals generate large amounts of data which can be extremely complex. The medical teams from various departments, who deal with daily outpatients and hospitalized patients with all kinds of equipment in the Yee Zen General Hospital, are faced with challenging operations every day. Yee Zen General Hospital began to adopt Advantech’s Command Center Intelligent System at the end of 2018 to integrate the original Hospital Information System (HIS) with the Internet of Things (IoT) to visualize the information in the hospital and improve management efficiency.

Yee Zen General Hospital was established in 1996 and is known as the “Hope of the Hill” because of the location in Yangmei. At that time, the number of employees was about 430, including 38 doctors. When the incumbent president Dian-Ying Li took the helm at the hospital, the number of employees grew rapidly and exceeded 550 people in 23 years, and the number of the medical staff reached 308 people. Nevertheless, Yee Zen General Hospital provides health care services in areas with over 600,000 residents, and that makes the cost for processing the information generated by large number of medical personnel and patients very high.

Geng-Wang Liaw, M.D. the Chief of Secretary in Yee Zen General Hospital Dean’s Office, points out that Yee Zen General Hospital implemented the HIS system to store various data to improve the hospital operational efficiency in early days. However, the data was hard to find once stored in the database because the source of data came from different divisions and was scattered throughout the clinic, emergency room, and hospitalization sectors. In addition, the data was classified by attributes such as medication, inspection, examination, imaging, etc., which made the data difficult to manage if the hospital didn’t have employees with information processing experience.

Yee Zen General Hospital began efforts to adopt Advantech’s Command Center Intelligent System in 2018. Geng-Wang Liaw and the IT team in Yee Zen General Hospital examined the issues they had and clarified what they truly needed by the steps below: The first step for building the system is to customize the user interface (UI) which contains the time interval axis, the graphics, and data charts. The second step is to set up flexible management functions to different divisions and job varieties, which follow the unified goal. The last step is to train IT team of Yee Zen General Hospital and to enable them to maintain the system by themselves.

With assistance from Advantech, Yee Zen General Hospital has confirmed the functions they wanted in the Command Center, and the system was launched in 2018 after several intensive discussions. Advantech’s Intelligent Command Center System is divided into three parts: the center part is the core part of the whole system, which is a horizontal 84” LCD screen to display overall management Command Center in large number of charts and graphs. The left and the right side are carefully placed 55” LCD screens: one screen rotates to display the real-time images from major areas, such as the halls, the pharmacy, the emergency rooms, and the rehabilitation centers; the other screen shows the comparative analysis of revenue data in the tabular format.

“Advantech has been deeply engaged in intelligent medical care for many years, and they are experienced in system architecture and capable of designing both software and hardware used in the medical industry. That’s why the problems we faced during the system implement period could be solved quickly and the system could be launched in such a short timeframe.” said Geng- Wang Liaw.

Most of the original data required by the Command Center was collected and processed by the hospital’s information department with some support from HIS computers. Advantech’s technical team provided the data transferring between database (Postgres) and the HIS data (Oracle), as well as WISE-PaaS/Dashboard editing access. The data transferring by the Command Center system can be processed by WISE-PaaS and presented in the visualized format.

Geng-Wang Liaw pointed out that modern-day trends to make operations intelligent has become the necessary structure for operations in medical institutions. Yee Zen General Hospital constantly adjusts the displaying of contents in the Command Center to closely match the system’s functions and needs. In the future, Yee Zen General Hospital will continue to cooperate with Advantech to provide the best intelligent medical services to its patients.